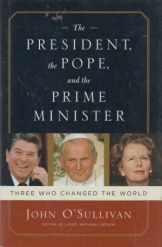 The President the Pope and the Prime Minister John osullivan

The President the Pope and the Prime Minister, John O'Sullivan, 360 pages
John O'Sullivan was a Washington Post columnist covering the Reagen administration, an adviser to Margaret Thatcher, and regularly covered the Pope's involvement in international affairs. The book follows the collaboration between the three in their fight against the Soviet Union.
General History